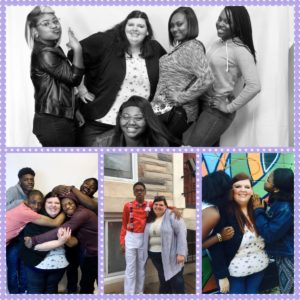 You live there? Are you the only white person? Do you feel uncomfortable? And last night, “You’re the only white person here…does that bother you?” When I responded no, I live here the person who said it looked disgusted and told me they didn’t understand, that’s okay friend you don’t have too. I have struggled to write these words today, because honestly it’s from my heart it’s probably going to hurt some feelings and offend some of my white friends, but I’ve reached the point where I don’t care anymore and what I am about to say needs to be said, because I am tired of hearing things like how does it feel to be white in that neighborhood, are you afraid to be outside and whole slew of other things.

A few years ago I picked up my belongings and I moved from Little Italy one of the nicest neighborhoods in the City, where the crime rate is low, most everyone looks the same and I while I am sure poverty exists it’s very well hidden to McElderry Park, where poverty runs rampant, I look different than most everyone around me, crime happens on the daily and I heard from many different directions, “You’re moving THERE? You know not many white people live there, aren’t you scared?” But to be honest I feel like many years before I made the decision to move here I became color blind, black and white doesn’t exist in my world, what exists in my world is humans and what exists in my heart is love. Love for my neighbors that others look down on because they look and possibly act differently from me, love for the people who are loud when I’m trying to sleep, love for the boys who roll their dice and deal their drugs outside my house, love for the people who have made this their community in one way or another. While the people I love may look and act differently than me and I might be one color and they another there is one thing that doesn’t change and always remains constant regardless of color, situation and class we are all human, we are all created equally in the image of God, “So God created man in his own image, in the image of God he created him; male and female he created them,” Genesis 1:27 (ESV).

I need to clarify a few things before I continue, if you would have asked me 10 or 15 years ago if I thought that this is where I would be and this is how I would feel, I would have said no, and I would have had a similar attitude as many people around me do today. I met someone who changed my life, and my attitude almost 13 years ago, I met a dirty black homeless man and all I could think of was about how I was a naïve white girl from the Midwest who knew nothing about this person who looked different than me, acted different than me etc. and I will be the first to admit I had an attitude about it, to the point that I didn’t speak to him only threw bags out the window towards him for almost a week. During that week for the first time I experienced true heart conviction, I felt God breaking my heart more and more for this person who was different than me, I felt guilt for not being more open to get to know his story. I took the risk, I sat with a dirty man in the middle of a busy diner and I listened to his story, I heard his pain, I felt his discouragement and I saw his determination for change. I tell you all of this because my heart has been broken lately and the following words may sting and may hurt but I write from my heart and from a place of frustration, but also understanding because I was that person once who felt uncomfortable around people who were “different” than me. I pray that as you read my words, you understand this is less about me being angry and more about my desire for people to see the world differently around them.

I look around me and I see the Black Lives Matter movement taking off and it angers me, not because I don’t believe that there should be value in Black Lives, trust me I do and I find it heartbreaking that daily another young black person is losing their life to the streets in one way or another, but I truly believe there should be value in all lives. I think back to a little over a year ago when the city I love was being destroyed from one side of the city to the other business being destroyed, buildings being burnt to the ground and my phone ringing off the hook my white friends from the suburbs calling not to check on me but to instead tell me I need to get out, I needed to come stay at their house for a few days, I needed to make sure I was in a safe place. It’s great they are worried about my well-being, but very few of them asked how my neighbors were, not one of them said hey why don’t you bring a few of your neighbors and come hang out with us. To be honest while I should have been grateful that I had friends who were concerned about my well-being and please don’t misunderstand me I am grateful for friends who care, but in this moment I was angry, angry that my suburban friends wanted to “rescue me” in a crucial moment. I later said to a few of them in casual conversation how do you think it would have felt to my neighbors if I packed up an fled the neighborhood in the middle of distress, knowing that most of them didn’t have that option? I was faced in that moment with silence not many of them knew that to say.

That same week when cleanup efforts were happening in our neighborhood, my living in the neighborhood was questioned by a young girl who came from the suburbs with a group of her friends to help in the midst of chaos and her exact words were, “No young professionals would chose to live here, Canton doesn’t count as part of this neighborhood.” She just assumed that because I was white I couldn’t live in such a place as this and when a few of my boys walked up and said to me in front of her, “Ms. Colleen there are too many white people here,” she clearly got offended, but I tried explaining to her that in a few hours after everyone got their feel good moment in the midst of tragedy they would go home and very few of them would remain here, the truth hurts. But the reality is suburban friends love to be rescuers in the midst of tragedy, when they can come to a place where a bunch of people who look like them are going to be. The truth is that very few of them choose to stick around after the tragic moment has ended and it becomes uncomfortable, few of them want to make an investment that’s going to make them uncomfortable after the moment has ended.

I am not asking any of you to pick up from your nice comfortable home in the suburbs or to even understand how a white girl from Kansas could want to live in the “hood” but what I am asking you to do is to look at people who are different than you with a different perspective are we really all that different? If you’re a Christian (which I won’t assume that everyone who finds there way here is) you should know that Black and White exists in the world but God never intended for the world to be so cruel when it comes to color, in fact in John 13:34 He tells us that we should love one another as He loves us, which is without boundaries, without worrying about how much money the person next to you has, what color they are or where they live.

I have learned a few things since moving into the hood about loving people, I have also learned so much about community, I have learned that once you’re accepted you’re going to be loved and cared for in ways that you’ve never imagined, that when it comes down to it the people who live near you are going to be the ones you count on in tragedy. That community becomes family, that once you’re accepted you’re no longer black or white you’re just one of them. Today as I sit down to write I want people to be more educated about what inner city is, I want them to know that it is more than just a few corner boys hustling drugs, it’s more than a poor grandmother raising her four grandbabies because their mom is an addict, it’s more than a single mom raising her babies alone because their dad was killed across town trying to make some money for his family. There are many lessons to be learned from inner city living, the people I have chosen to live among have taught me of a love that I never knew existed, they have taught me so much about being Jesus even when they don’t know who Jesus is, they have inspired and encouraged me, they have taught me what it means to make something out of nothing. They have taught me that the color of my skin means very little.

I want to close with encouraging you my sweet friends to change the way you look at people, to change the way you view circumstances of those who may be different than you, I challenge you to pray for heart change in your life. I always encourage mission teams that are coming to serve alongside us in Baltimore not to view this as a trip to come and help people but instead as an opportunity to come and live in a community full of love for a week, an opportunity to come and learn how to love others as Jesus loves us and to be a part of something they may otherwise never experience. I’m praying for you my sweet friends this week to take a moment and put yourself in an uncomfortable situation this week and experience it differently, to take a moment and get to know someone who is not like you.