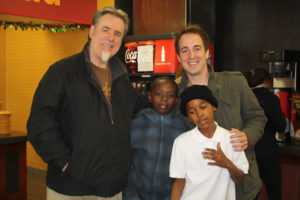 So lets just get one thing out in the open, I love my kids so much and I hate disciplining them even though I know that it’s part of molding them to be amazing kids and adults. I am constantly reminded me of the verse in Proverbs 22:6, “Train a child up in the way he should go, even when he is old he will not depart from it.” I know that God has brought me here to love these kids even when it means I have to be the mean “Ms. Coco!” Which apparently yesterday I was mean “Ms. Coco!” I also realize my own short-comings when it comes to disciplining the kids, I will give them 50 chances to do the right thing before I actually enforce a punishment for doing the wrong thing, so sometimes I realize I have enabled them to do the wrong thing and push me as far as they can before I actually enforce the punishment for the “crime!”

Yesterday two of my boys whom I do love so dearly, were caught doing something I have repeatedly asked them not to do… I can only repeat myself 1000 times before it becomes frustrating, I come home to see two boys fleeing over the gate and taking off down the street, we’ve talked countless times about how they are messing up the gate when they do this, about how something could happen to them in the back and no one would know, how someone could see them climbing the gate and think they were breaking in and call the police (in which I let them know that technically they are trespassing if they are climbing over a locked gate). Unlucky for them I pulled up as they were leaving and caught them, I sat them down on the steps and had a nice firm talking to with them, about how I was not going to ask them to stop coming into my backyard while I am not home again, and that they are on punishment and I didn’t care how nice it was outside yesterday, today or tomorrow they are on backyard restriction for 1 day, which is probably the WORST punishment I could ever give them!

Of course after much arguing about why they were back there, about how I wasn’t home to let them play (which they were prepared for I always tell them when I won’t be home in the afternoon for them to play), about how they needed their balls (which are actually mine) and the best argument, “Ms. Coco we thought you might be out back and couldn’t hear us knocking…” I asked them to remind me of all the reasons they should not be in my backyard when I am not home, and they did. I finished the conversation by telling them that I was upset that I’ve had to have the same conversation with them and that they needed to go home for the rest of the evening and they could come back on Wednesday.

As I went inside I was remind again of the revelation I had a few weeks ago with another one of my kiddos, about how Jesus has the same conversations over and over and over with us, but there comes a point when we have to have consequences for our actions, and we had reached that point. I feel like banning the boys from my backyard hurts me just as much as it hurts them especially when I know that the other kids will be banging down the door this afternoon wanting to play out back, and I will let them…knowing there are two boys who are going to be watching from the sidelines.

The best part of this whole interaction with these boys came about 40 minutes later when I heard a knock on my door, the smiley face wasn’t out so I knew it must be something important if they were knocking. I opened the door to see one of the boys standing in front of me with tears in his eyes, telling me how sorry he was for not listening to me, how much he understood why I didn’t want them to be in my backyard, and then he ended the conversation with and “Please Ms. Colleen don’t call the police on us…” I am not going to lie I giggled a little on the inside because I would NEVER call the police on them, but the fact that the thought of it scared him enough to want to apologize and promise not to climb the fence again made me laugh.

As I was sitting down this morning to do my devotionals I prayed for this specific boy, I thanked God for his heart, for his repentant spirit, for the leader who is teaching him about forgiveness and asking about forgiveness, for the time that I get to spend with them teaching them right from wrong, and for the fact that when I look into this young mans eyes I see a leader, I see someone who is going to be delivered from the strongholds of his past, someone who will someday be changing lives. Would you pray that same prayer for this child, a prayer of thankfulness for who he is?